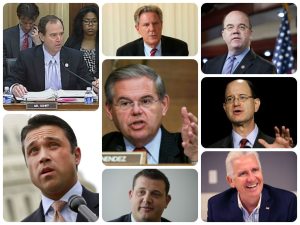 “We would like to thank Chairman Menendez and the many other Congressional defenders of human rights who have stepped forward to call the world’s urgent attention to the attacks against the predominantly Armenian population of Kessab,” said ANCA Executive Director Aram Hamparian.  “We look forward to working with each of them to ensure that Turkey’s role is explicitly condemned by our government, as we continue efforts to secure the safety and return of Kessab’s civilian residents to their ancestral homes.”

In a letter to constituents sent earlier today, Chairman Menendez stated, “Like you, I am gravely concerned by reports of a March 21, 2014 attack on the predominantly Syrian Armenian town of Kessab, near the Turkish border, by al-Qaeda-linked terrorists based in Turkey.  Attacks of this nature are another example of a dangerous new chapter in the violence now engulfing Syria; one where Syrian minorities are actively targeted by Islamic extremists because of their religion and ethnicity.  I condemn all such attacks, including those on Armenian Christians.”

In a joint letter to President Obama, Representatives Pallone, Grimm, Valadao and Schiff echoed these concerns, noting “When coupled with a mass exodus of the Armenian community, these events are far too reminiscent of the early days of the Armenian Genocide, which took place nearly 100 years ago in Ottoman Turkey under the cover of World War I.”  The letter goes on to state, “With the Christian Armenian community being uprooted from its homeland, yet again, we strongly urge you to take all necessary measures without delay to safeguard the Christian Armenian community of Kessab.  We also believe that now is the time to redouble America’s efforts to ensure that all minority communities at risk in the Middle East are afforded greater protection.”

Senior House Foreign Affairs Committee member Rep. Brad Sherman stated that he has “been in contact with the State Department and have urged them to take the necessary actions to assist the Armenians in Syria. Turkey must take immediate action to help prevent extremist attacks on Armenian civilians.”

Rep. James McGovern, Co-Chair of the Tom Lantos Human Rights Commission, explained, “I strongly condemn the brutal attacks on the Armenian-populated town of Kessab by al-Qaeda affiliated armed bands.”  He went on to note that he is “deeply concerned by the reports that these attacks allegedly originated in Turkey and demand that the United States and international community conduct a thorough and critical investigation of these claims.”

Central California Congressman Jim Costa (D-CA), in a letter to his constituents, wrote, “As you may know, al Qaeda-linked terrorists attacked Armenians and other Christians in the Syrian town of Kessab, Syria six days ago. These attacks are deplorable, and I have made clear to the State Department that we must determine exactly what happened and continue to work with our allies to prevent such atrocities from happening again.”

Representatives Adam Schiff and Brad Sherman shared their concern regarding the Kessab attacks on social media today, joining with concerned Armenians around the world in an effort led by the Armenian Youth Federation to trend the hashtag #SaveKessab.

Thousands participated in the international targeted tweeting session on Friday, March 28th from 3:00pm to 5:00pm EST, to raise awareness regarding the humanitarian crisis in Kessab and Turkey’s role in the attacks.

“The vicious attacks by al Qaeda-affiliated terrorists against Armenians & other Christians in #Kessab are beyond appalling. #SaveKessab,” stated Rep. Schiff.

In a statement followed by an question and answer session during the daily State Department press briefing on Friday, State Department Deputy Spokesperson Marie Harf explained, “we are deeply troubled by recent fighting and violence that is endangering the Armenian community in Kasab, Syria and has forced many to flee. There are far too many innocent civilians suffering as a result of the war. All civilians, as well as their places of worship, must be protected.”  Harf continued to note, ” We have long had concerns about the threat posed by violent extremists and this latest threat to the Armenian community in Syria only underscores this further.”

Over the past week, thousands of Armenian Americans have contacted President Obama and their Senators and Representatives in response to an ANCA Action Alert (http://www.anca.org/savekessab) urging immediate condemnation of the attacks against the civilian population of Kessab and, specifically, Turkey’s role in facilitating those attacks.

Located in the northwestern corner of Syria, near the border with Turkey, Kessab had, until very recently, evaded major battles in the Syrian conflict. The local Armenian population had increased in recently years with the city serving as safe-haven for those fleeing from the war-torn cities of Yacubiye, Rakka and Aleppo.  On the morning of March 21st, extremist foreign fighters launched a vicious attack on Kessab civilians, forcing them to flee neighboring Latakia and Bassit.

We are writing to express our serious concerns regarding credible reports that Islamist rebels entering from Turkey this past weekend were involved in attacks in the Latakia region of Syria, specifically the town of Kessab, which is a predominately Armenian populated area.  Such actions shock the conscious and must be resoundingly condemned.

As the Wall Street Journal reported on March 26th, “For Armenian-Syrians from the town of Kassab [sic] in Latakia, which rebels overran this weekend, the Turkish involvement reminded them of a dark chapter in their history: the Armenian genocide perpetrated by the Ottoman empire in 1915.”  These tragic developments are accompanied by disturbing reports of Armenian homes being looted and occupied.  When coupled with a mass exodus of the Armenian community, these events are far too reminiscent of the early days of the Armenian Genocide, which took place nearly 100 years ago in Ottoman Turkey under the cover of World War I.

At the beginning of the 20th century, nearly 6,000 Armenians lived in Kessab.  However, the July 1915 deportation of the Armenian population at the hands of the Ottoman Turks resulted in the loss of nearly 5,000 lives.  Now, ninety-nine years after their initial deportation, another expulsion of Armenians is a telling reminder about the dangers of genocide denial and Turkey’s failure to address its genocidal legacy.

With the Christian Armenian community being uprooted from its homeland, yet again, we strongly urge you to take all necessary measures without delay to safeguard the Christian Armenian community of Kessab.  We also believe that now is the time to redouble America’s efforts to ensure that all minority communities at risk in the Middle East are afforded greater protection.

Thank you for considering this urgent request.

The inauguration of the renovated St. Michael’s Catholic Church in Kessab

Quote of the month